I have a couple of ATC's to share with you today - although I nearly didn't make it because my parrot made me laugh so hard I was crying!!! We had a squeaky toy for him that he had destroyed the tummy on so hubby removed the squeaker to prevent Chucky from eating it. So just now he was squeaking the squeaker at Chucky who was getting all over excited. He let Chucky get the squeaker and he (Chucky) lets out a loud and very squeaker like squawk. That was it - I was in hysterics. He obviously hadn't realised it was the squeaker making the noise and thought that he had to make the noise when squeaking it lol. If only I had been able to record it!!

Anyway on to the ATCs.

They are pretty simple this time. I bought an ATC pack a couple of years ago at the Manchester Stitch and Crafts show and haven't really used them much. Then my mum gave me her bits when I was visiting at the weekend and it inspired me to get mine out and actually use them. So the white base cards were pre-cut and then I used a golden pearl paper with rounded edges on the one and a rose themed backing paper on the other (both from the set). To finish the cards I simply added a felt butterfly to each. As the butterflies are quite intricate I decided that adding anything else would just look a little OTT. I used colours that matched the backing, so using a dark purple for the darker background and a paler lilac for the lighter background. In the picture it does look like the second card is washed out, but it really is just a paler version.

I would like to enter this collection into the following challenges:
C4C380 Animals
crafting by designs - Anything Goes
dragonfly dreams - Anything Goes
Country View #50 Rust (the back panel of the darker card is rust coloured)

Here is another of my colouring pages completed: 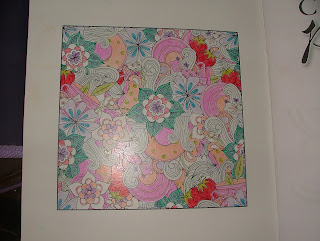 And some of my seedlings too: 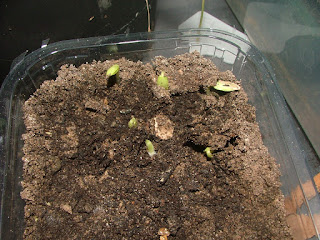 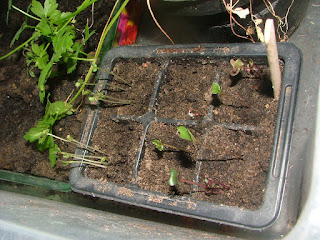 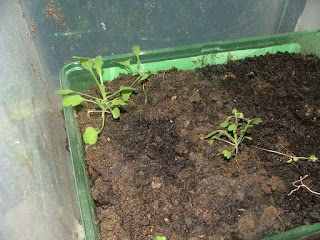 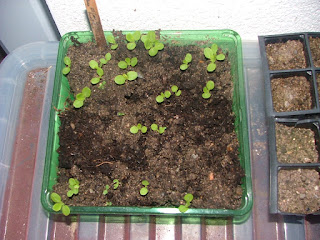 Hugz Tinz
Posted by Furrbster at 20:54