We have a new challenge started today over on our Promarker challenge blog. As always our theme is anything goes, but our optional twist this time is Animals. 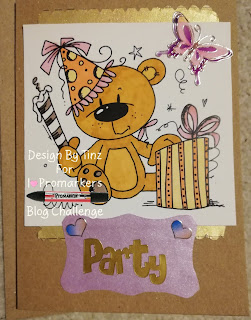 Our sponsor for this challenge is Bugaboo Stamps 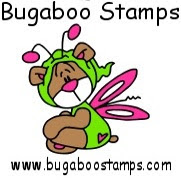 and I have used Birthday bear
I coloured the bear in with the following promarkers - Pink Carnation, Dusky Rose, Tequila Sunrise, Pastel Yellow, Warm Grey 3, Raw Sienna.
I then simply cute the image square and layered over a gold scallop edged piece of scrap paper. I layered these onto a Kraft card base. Finally, I used stickers to make a sentiment panel and add some details.
I would like to enter this card into the following challenges:
CraftyCatz #556 Animals
AudSentiments #277 Anything goes
AlphabetChallenge - F for Furry Friends
CatchtheBug - Anything Goes
craftycalendar - Anything Goes

Thanks for taking the time to view my blog,

I just thought I would stop by and share an update on my llama cross stich from Wrendale designs :) 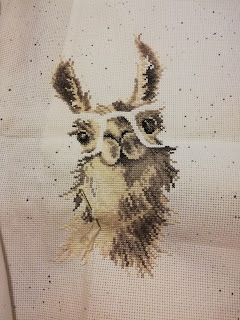 She is coming along nicely now :)

As the weather is so nice recently I decided to play with one of my pre-printed cards. I always struggle knowing what to do with these as the design is already there. So I decided to use glitter glues to highlight some of the design and then simply add a 'On your retirement' sentiment to finish. 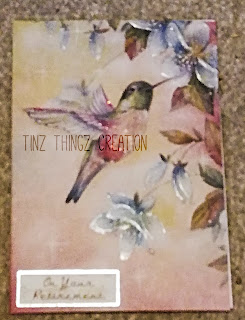 I also added a sentiment panel to the inside. 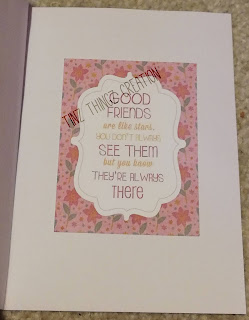 I would like to enter this card into the following challenges:
SimonSaysMonday - Beautiful Blooms
AudSentiments #276 Anything Goes
MTTC #459 Things in the sky
craftycalendar - Anything Goes

I am so glad that summer is here at last - however I need to learn to remember to water my garden :O

It doesn't help that I am constantly working late either, so when I get home I just eat, do chores and fall into bed generally lol.

However, I did manage to make this little dog, that  stitched during my lunch breaks at work, into a little masculine birthday card. 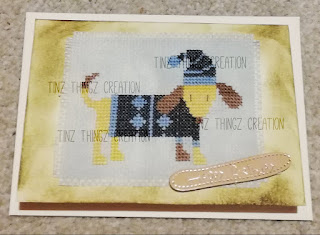 I frayed the edges slightly on the cross stitch. I then blended a Distress Ink over the edges of the card to give the feeling that the pup is out and about in his woollen outfit. Finally I just added a Happy Birthday sentiment.
I would like to enter this card into the following challenges:
TheMaleRoom #151 Dads and Granddads 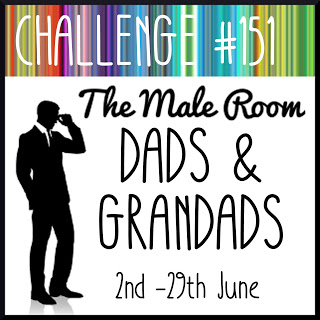 Spots and Stripes @ I Love Promarkers

What lovely weather we are having at the moment. Unfortunately my poor back is hating it as I went out to sort the garden at the weekend and it got quite badly burnt :(. 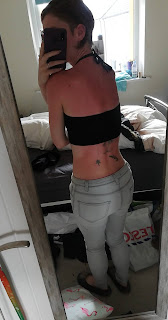 Anyway we have a new challenge starting today over at I Love Promarkers, with the optional theme of spots/stripes. We are sponsored by the lovely IkesArt and I have used a little kitty from a Christmas set. 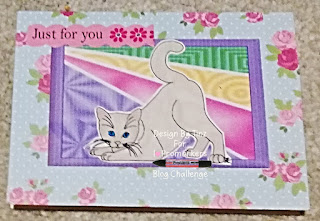 I coloured the image with various greys from the cool and warm grey collections, and then used Azure for the eyes. I fussy cut and then layered onto a stripy panel. I covered a base card with polkadot roses backing paper and layered the image panel onto this. I finished with a floral sentiment.
I would like to enter this card into the following challenges:
SOS #447 Fur-babies
SUYP #67 Furrything Goes
craftycalendar - Anything Goes

We have a new Anything Goes challenge over at Creative Moments today, and this time we are sponsored by Morgans Artworld. I have used Teddy 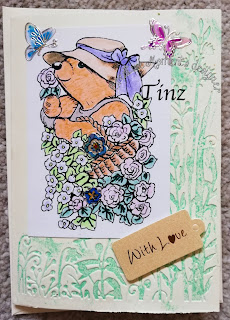 I coloured the image with watercolour markers and then cut into a rectangle. I embossed the card blank after inking the embossing folder, to give a letterpressed look. I then layered the image onto this and added some butterfly and flower stickers and a foiled sentiment tag.

MMM #150 Outdoor fun - the bear is enjoying the garden!

I also have an book review for you today:

The Journey 1-3 by Glenn Trust

The first story tells of the kidnapping of a young woman by a serial murderer, who kills just for the fun of it. The story starts at a petrol station where the man has just killed the owners of the station and when he goes outside, he sees the girl filling up her car and takes her hostage to use the car. This story switches between three different viewpoints – that of the kidnapped girl, who turns out to be stronger and more aware than her kidnapper thinks she is; that of an older man who is self-employed and has had enough of his life where his ex-wife and children are constantly making him out to be the bad guy because he called for a divorce, even though the marriage was failing before this with them always arguing and making life difficult; and that of a law enforcement officer who deals with traffic violations. You get to know a little about what is going on with each of them before they eventually meet up when the stolen vehicle is pulled over. The original ending for this book is brutal and honest, but in order to create a more approachable character to use to create a series the ending was changed and the young woman (who we find out is called Alice) is changed from a murderer into somebody who has learned how to play the rough game of life.

In the second book Alice has decided to try and settle down. She is sick of the road and being on the run. She moves to Las Vegas and gets a job at a loan company, whilst living in the red-light district. She gets to know and like the people that she works with, but the younger business partner wants more than she is willing to give. However, things take a turn when her boss asks her to help him when his business partner tries to turn on him and leave him bankrupt and Alice’s new friends out of business. Alice also finds herself a lover in this story, who she falls in love with but unfortunately, he is a law enforcement officer and she cannot stay with him. She sorts out the problem, however this means that she must leave behind the new life she had started to build.

The third book sees Alice once again trying to settle down. She finds a little out of the way place on the beach where only the locals are around, and the students during Easter break briefly. Sea, sand and sun, and a relaxed way of life. There is a young lad, who Alice comes to view as her brother, and an older man who keeps to himself and doesn’t gossip. She settles into a life easily here. Meanwhile, her law enforcement lover is missing her dearly and putting his career on the line to try and trace her. He knows she is still alive and also that she loves him, but doesn’t know why she simply left without a word. Unfortunately, as is the case in these sorts of series, things take a turn for the worst when it turns out a millionaire has decided he wants the island in order to build a moneymaking tourist resort that will ‘benefit the community’. He will go to any means to obtain this piece of land, but Alice will not allow it to happen, especially when she sees the impact it has on her older friend and boss. She has a plan that will make the millionaire seem much more dubious and the council will not be willing to back his plans due to the associated scandal. However, it means that once again Alice will be having to move on. Unfortunately, this is just before her lover manages to get to her location.

Overall I really enjoyed this narrative.
Posted by Furrbster at 08:30 3 comments:

It is a new month and so time for a new challenge at MAWTT, with the theme of Art Deco, chosen by Mrs Duck.

Here is my creation for the challenge: 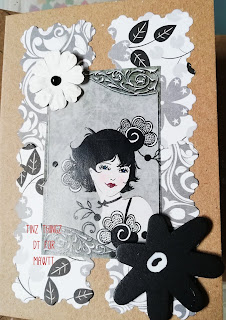 I used a pre-printed image that I had in my stash and used this to focus my card around, keeping the theme black and white to match the flapper girl.
I would like to enter this card into the following challenges:
CatchtheBug - Anything Goes
MTTC #458 Floral
SweetSketchWednesday 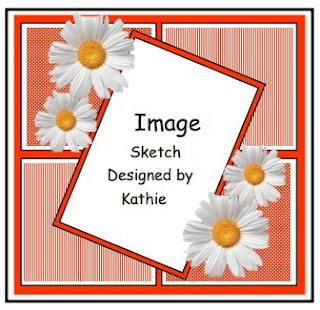