Our twist for this challenge over at Creative Moments is to add some cats to your creation - I love cats so this was a nice easy one for me :)  I have used Cat Lady 'All My Cats' from one of our sponsors - Bestie 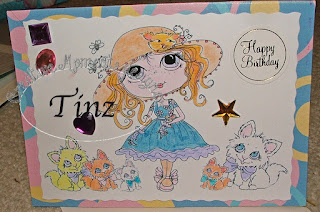 I coloured the image using papermania watercolour markers and then cut a scalloped edge with my paper trimmer. I used a patterned base card and simply added some gems and a sticker sentiment.

I would like to enter this card into the following challenges:
ATSM #304 CAS
CCEE1831 Colouring
inkspirational #166 10 min card (just under 10 mins due to the colouring)
SUYP #33 Furrything Goes


Here is the book review as promised:


The Last Girl by Jane Casey
This is another Maeve Kerrigan story. I got a few of them from kobo as they were on offer, and it is always good to have a collection of books. This time a mother and daughter have been murdered, the father was assaulted and the second twin has been left traumatised and unwilling to speak. Maeve has to find out what happened to make somebody want to kill a mother and daughter, as it was not a burglary attempt gone wrong. Derwent instantly believes the father is to blame as he is an esteemed criminal lawyer, but although he does not seem to be overly upset, he has no motive for the crime, especially as it was his favourite daughter that was murdered. It doesn’t help, however that he is suspicious of the police and so keeps things back that would help the investigation, which could ultimately risk the life of his last daughter. A very unusual story which keeps you guessing as it unfolds new pieces of evidence. As with the previous books this is very well written and could be believable.