I decided to have a play with my watercolours for a one layer birthday card today.

Here is my creation: 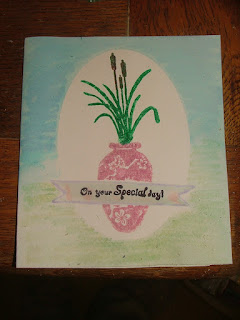 I used watercolour cardstock to make a card base. I then took an oval of card, and a banner, and used temporary adhesive to stck them to the base. I then used Papermania Pastel Watercolour pens over the background and used a wet spongue to blend the colours. I then used a mask to leave just the banner area clear, and again used the pens to create a separate wash on the banner - outlining in purple. Finally, using the original mask I stamped a Creative Impressions vase and reeds stamp into the clear centre (after removing all masks obviously). To finish I stamped a Honey and Hugs sentiment onto the banner area.

I also have an audio book review for you this time!


Dead and Buried by Stephen Booth
As fires raze the moorland of the Peak District, causing devastation for the National park, there are several surprises waiting for the local constabulary. DS Ben Cooper has to join forces with DI Diane Fry, who is not happy to have been dragged back to the Derbyshire countryside. A discovery of some possessions, belonging to person’s who went missing over two years ago means that the major crime squad have to re-look at the evidence received. Furthermore, there is a new body found in the local, but boarded up, pub. It is a race against time to find out what, if anything, connects the two separate groups of people. Meanwhile, Ben is also trying to prepare for his wedding. This is a very good, fast-paced crime novel, with several twists. I think a better understanding of the characters would come from earlier books however.

Thank yuo for looking,
Hugz Tinz
Posted by Furrbster at 21:52