Another lovely weekend has now passed, with lots of time spent outdoors doing allotment and garden. However I did also have time to make a Christmas card for a few challenge blogs, and also for my new challenges coming up on my facebook groups - details will follow on the first of the month.

So here is my Nightmare before Christmas themed card: 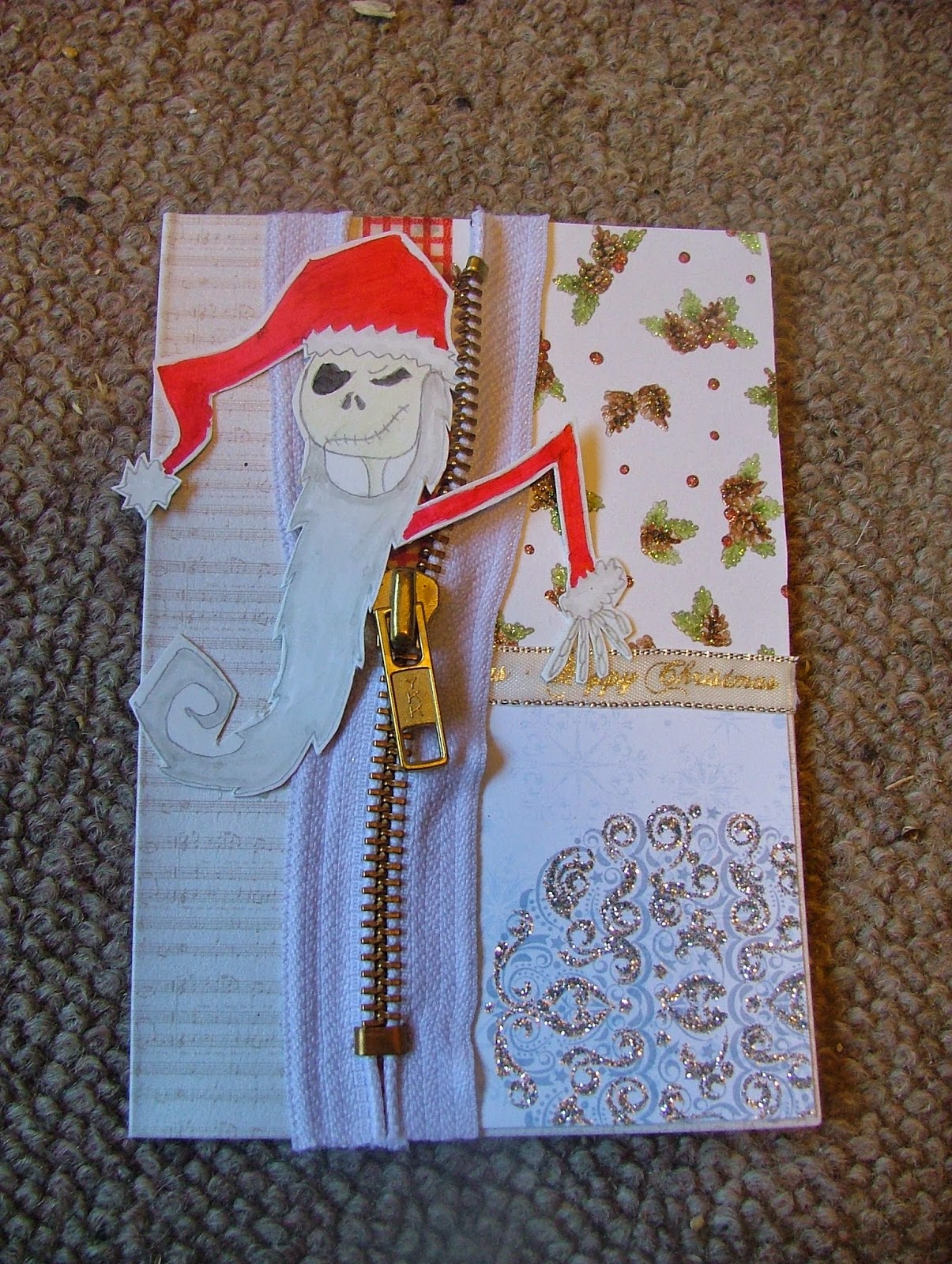 The idea behind this card is that Jack Skellington - as Sandy Claws - is entering into Christmas land, through the zipper. To create this card I used a Papermania music score base card and layered a Winter Wonderland backing paper, and a panel cut from a shop-bought Christmas card, onto this base, following the Jinglebelles sketch:

I drew Sandy Claws onto a thick white card and coloured him with Promarkers. I then cut him out close to the outline. A 'Happy Christmas' ribbon covered the join between the two panels, and a red gingham washi tape the central join. Over the washi tape the zipper was adhered, with the cut out Sandy Claws pushing his way out through it.

The other challenges that this card is to be entered into are:

Horse Play by Jo Carnegie
This story is based in a fictional village in the Cotswolds, and is apparently one of a series, but this is the first I have listened to (or read). The main plot for this story is that of ‘Nobby’ the Fox-Titts racehorse that they rescued from the Melton Mowbray Fur and Feather auction. With the new addition of Kizzy to their farm, as a stable hand, they begin to see Nobby’s true potential. That is until a terrible accident that leaves Kizzy unable to ride a horse for a minimum of 6 months, and brings a famous dressage rider into her life. As Kizzy’s relationship with the dressage rider develops, Nobby is taken under the wing of an up-and-coming jockey who has his own issues, Calypso has issues with relationships and her career and Caro’s ex-husband reappears on the scene to cause problems in the peaceful village.


This is a very fun book, however, as I have found recently occurs more often than expected in this sort of book, there is a lot of foul language used, and a lot of sex, which the author occasionally goes into quite a lot of detail with. As long as this type of language does not bother you in a book, then I would recommend giving it a read. You will want to smack some of the stuck-up stupidness out of the characters on occasion, and then want to hug them the next moment. A fun, light-hearted listen, which is well read on the disc.

Thank you for looking at my blog

Hugz Tinz
Posted by Furrbster at 20:30