I got my new Big Shot Plus out to have a play today! It is so much harder to move around and store than the normal one (and it s not as nicely coloured either - I have the black and pink normal big shot), but it is nice to be able to die-cut from A4 sheets of card, without having to cut them down first. So although my creations are not actually obviously requiring the large big shot plus it was more useful :P.

This is my first ATC collection of 2016 - Glitter Flowers: 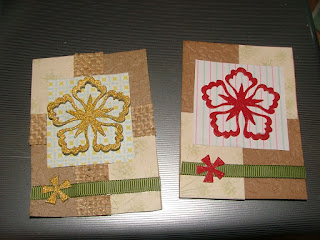 I embossed some Kraft card using the new Tiddly Inks embossing folder free with Quick Cards 148, and cut two ATC sized pieces of card. A small piece of patterned paper from an ATC pack was used for the background squares and the centre patterned paper was free with a cardmaking magazine a few years ago. I used a Marianne designs die for the main image, cut from glitter cardstock, and a quick-cutz die for the smaller flower that was layered over some ribbon from my stash.

These ATCs followed the sketch #233 from Sweet Sketch Wednesday 2 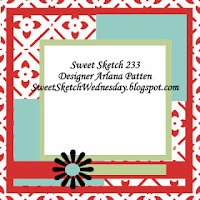 I would also like to enter the following challenges:
mod squad At least one die-cut
deep ocean #119 Anything Goes
live and love crafts #43 Something New

Here are some close-ups of the ATCs: 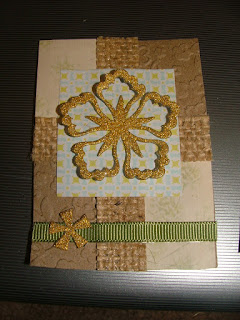 This ATC had the embossed design side up, had some tweed ribbon to break up the paper squares, used the patterned paper side that had yellow accents and gold glitter card for the die-cuts. 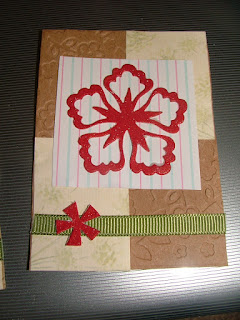 ATC #2 did not have ribbon to split the squares, used the de-bossed side of the Kraft card and red glitter card for the die-cuts, as well as using the opposite side of the patterned paper, which has pink stripes.

This one was for the sketchy colours challenge 262 Red, brown and white - I accidentally used the green ribbon but I couldn't take it back off, I hope this is ok?

Audio Book Review
Resistance is Futile by Jenny T. Colgan
Connie is recruited, along with five other astonishing mathematicians, to break a code, for which they all have to sign a secrets act declaration. Connie is used to be seen as weird, but here she is accepted just as she is, especially as Luke s even weirder, even for a mathematician. When Connie manages to crack the first part of the code, at the same time as their employer is drained of colour, and life, chaos breaks out. A fun story that you can imagine playing out exactly the way it does if it was real-life. There are twists to the plot, the people you start off disliking become more likeable as they are put under pressure and still hold out for their friends. This is not quite a happy ending book though unfortunately, but it does leave itself slightly open for further interpretation and imaginings. I would recommend this book as an amusing and thought provoking listen on long journeys.

Thank you for taking the time to look at my blog,
Hugz Tinz
Posted by Furrbster at 20:30