A quick second post for this week - with a card! This time I have made a Christmas card which is called 'Polar Pals'. I was going to use a peel-off for my main image and add a stamped background - however a quick look through my peel-offs revealed that there are no polar bears, or penguins believe it or not! 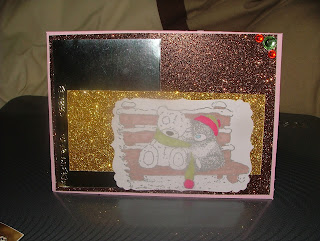 I layered glitter card and mirri card in golds and silver, over a pale pink base card (I am out of white card large enough I discovered tonight!). The image is from some 'Me to you' clear stamps I got a while ago and it is the first time I have used this particular stamp from the set. Although this is supposed to be a snowbear, I thought he made a lovely polar Tatty Ted friend. I coloured the image using the Autumn limited edition promarker pens for the muted colour scheme. The image was die-cut using X-cut nesting large label dies, and then the snow accented with white glitter glue (which has not really shown up in this picture). Finally I added some rhinestones to the top corner to accent the hat and scarf, and a sentiment peel-off down the side.

I also thought I would give you an update on my Fish Tank cross stitch - it is now 30mins over 100hrs! 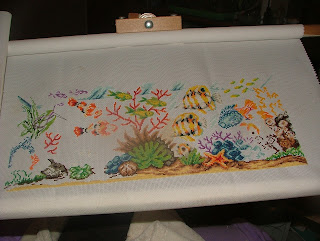 If you feel like trying something new we are making sauces this month in my Crafting Techniques group on facebook! https://www.facebook.com/groups/202398906628216/

I will have another cross stitch to show you soon - a bit of a funny kitty lol.

Looking Good Dead by Peter James
When Tom Bryce picks up a CD that has been accidentally left behind on the tube he doesn’t realise what a large impact reading the disc is going to have on his personal life, and that of his wife Kelly. On the disc is a video of a savage killing – is it real or a film trailer? When DS Roy Grace is summoned to a headless body it becomes clear that this is the same girl on the CD, but what should Tom do? And how is Roy going to track down the well-organised killers?


This is a fast paced book with several angles and perspectives, that keeps you guessing as to what will happen next. Some clues are obvious before the team spot them while others are a surprise even to the reader (or listener in this case). Well-read and well written this is a crime novel worth a listen.

Thank you for taking the time to look at my blog, and I hope to see some sauces coming in :)
Hugz Tinz
Posted by Furrbster at 21:54