Here is the cross stitch update I promised you, as well as another Audio Book Review. I finished this flower in just under 4 hours, but I did miss the border off as I think it will make a better card if it is set in an aperture with the cut-off edge right up against the aperture side. 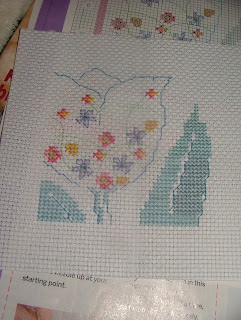 This was a free kit back in 2006 I think, with Cross Stitcher magazine. Unfortunately there was not enough blue thread to complete the leaves, so the second leaf has a hint of shade on one side - the thread colours listed were not the same as the threads given :(


I would like to enter this for the following challenges:
Card Mania #72 Pastel colours
mod squad Focal flower


I would like to enter this creation as it is into the following challenges:


Here is my Fish Tank update at almost 106 hours!! 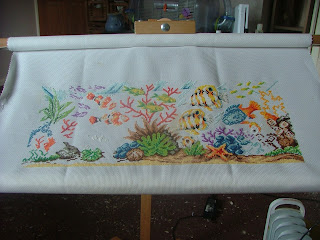 And finally, the audio book review:

Full Tilt by Janet Evanovich and Charlotte Hughes
Former wrestler Frankie is running for mayor of quiet Beaumont, but we he starts getting threatening mail his wife, Deedee, calls on her brother, the notorious Max Holt. Jamie has her life all planned out, with the main focus being on her newspaper, but with the arrival of Max, her silent partner in the newspaper, her life is turned upside down and she is able to give a first-hand account of the biggest news in town.


When I saw that this book was read by Lorelei King I knew it was going to be a fast paced and intriguing crime story. However this book also has plenty of humour also, with a variety of characters. There are several different side plots which keep you guessing at who is the bad guy, but there are also moments where Jamie is much more naive than possible which make you roll your eyes. A very good book for a long commute, but also easy to put on pause for a while without losing track of the storyline.

Oh I nearly forgot to mention - not only do we have some little baby micees, but Arthur and Doris - the two rabbits - have started to get along and both went to bed in the same hutch tonight - of their own accord! Fingers crossed they are now friends!
Posted by Furrbster at 19:54