Hello on this grey and miserable Monday evening. I want to share with you all my latest Christmas creation, using the technique in focus on my facebook group: Glass Painting. I decided to make a Christmas Poinsettia suncatcher. I got this kit from my grandma, and due to its age the paints do not work quite as well as they should (even though they have not been opened), but as long as the piece stays flat until it dries they work well enough. So here is the sun-catcher: 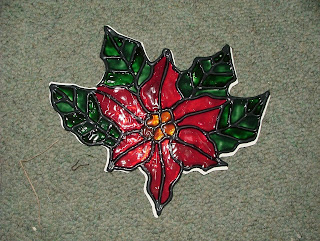 This is on a plastic backing to keep it safe until Christmas.

I would like to enter this little flower into the following challenges;
Winter Wonderland Anything but a card
Crafty Hazelnuts 234 Merry and Bright

For those of you who have been following my progress, here is an update on the height chart - now at 11 and a half hours. 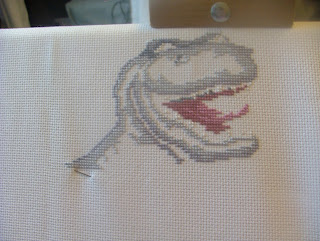 Emperor: The Gates of Rome by Conn Iggulden
This is the first of a series of historical fiction following the life of Julius Caesar. Although the book is loosely based around what is known of Caesars early life, the author does change things to make the story telling more effective. Some of this is explained in a Historical note at the end of the book (however as I have not studied Caesar in great depth I could not tell what was pure fiction and what was based upon fact).
This first book introduced Gaius Julius Caesar as a young boy, and introduces the reader in this way to the struggles that the public had to put up with – regardless of their rank. When an uprising kills Gaius’ father he goes into the town to see his uncle who is a famous Consul of Rome. Through Marcus, Gaius becomes a senator and Brutus a legionary. The second half of the book focuses on the uprising of Marcus against the other Consul Sulla, and the downfall of Marcus.


This was a very interesting book to listen to, and there are some interesting characters introduced throughout the book, whose views and influences have an impact on the way the young Caesar views the world. Possibly not for those who like historical fiction to e very close to fact, but I found this a very easy book to listen to.
Posted by Furrbster at 20:17