I have actually been doing some beading guys! It has been a while since I made something nice with my beads (even if I did manage to break one of the pots and end up with pearl beads EVERYWHERE!! 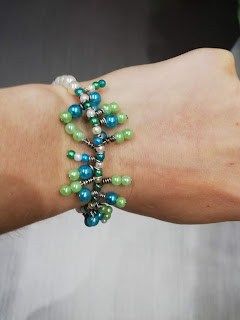 So the first thing to do for this design is to wrap the tassel beads - take a head pin and thread the desired beads onto it. Then fold the wire at 90 degrees above the top bead. Hold round nose pliers after the fold, on the long bit of wire and wrap the wire round, so that it is 180 degrees. Then use the pliers to rotate it round to make a full 360 turn, and a loop. Keep the round nose pliers in the loop you have created and use some crocodile, or long-nosed, pliers to wrap the remaining wire from this loop, down to the bead. Cut the wire and fold the end in tightly above the bead. Then these were just threaded on to beading wire, with pearls to make the main string.

I would like to enter this creation into the following challenges:
Simon Says Monday - It's a wrap (I have been creative with the theme as my beads are wrapped :D)
Crafty Catz #429 Pearls
AYLI - Girl or boy - when I am finally allowing myself time to do some beading it is always much more fun to create for girls - it is far too difficult to make beaded jewellery for boys that is not just a pendant based design :)

Anything Goes challenges at dragonfly dreams AND notjustcards.

I thought I would share my potato harvest from the experiment I did - the dirtier and less in number were from a compost bag, which had a smaller area for the potatoes to develop in, so they were not going to grow as many: 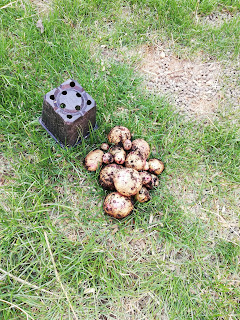 These in the purple trug are much cleaner and were grown in a potato sack, which has helped the potatoes air once the leaves died back, and stopped the soil getting too damp around the roots. 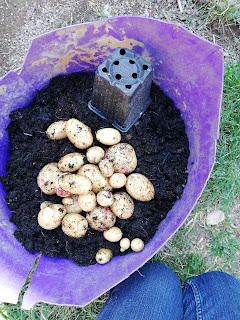 Hugz Tinz
Posted by Furrbster at 20:36