Stitching from a Stranger

It is time for a new challenge over at Creative Moments, and this time we have a challenge twist of Stitching - Real or Faux (or you can just play Anything Goes - we love to see all your creations). This challenge is being sponsored by http://www.bugaboostamps.com who are offering 7 digi-stamps - http://craftysentimentsdesigns.co.uk who are offering 3 digi-stamps -http://www.polkadoodles.co.uk/downloads-printables-store/, who are offering a £9/$15 voucher for their store - and https://www.etsy.com/uk/shop/RickStdennis, who I got my image from - A Stitch in Time.

Here is my creation - with some stitching and a digi stamp that includes stitching too! 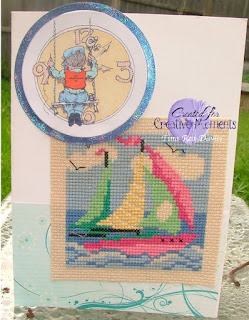 The patterned paper was printed a while ago off one of my CD-Roms - I cannot remember which one - as I thought it resembled waves in the water - for the boat to sit on. I thought the little guy on the swing, stitching the clock, looked like a sailor, marking the time. The border circle was cut using a Sizzix die from a snowflake set!

I have another audio book review for you today:
Letter from a Stranger by Barbara Taylor Bradford
When a letter arrives for their mother, twins Richard and Justine feel fine to open it. What they discover is a shock to them both and causes mistrust of their mother and an adventure to find their estranged Grandmother. When they find her there are even more shocking revelations to follow before the twins can begin to settle down to life again. I cannot say too much without giving the main part of the plot away, but much of the second half of the book is looking back in time through the written word of the grandmother, which is done very well. This is a moving story, with some drama, but it is in no way an action story, but more of a romance type book. Well written and well read it was a pleasure to listen too, but it is easy to drift of in some places when on a long commute.

I would also like to share a commission with you - it is a patchwork square stitched freehand for a friend at work: 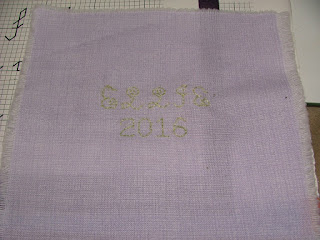 I would also like to introduce you to Florance (Flo for short) who is the same type of bird as Billie and Beau who you have met previously. She is the wild colouration of a Red-rump parakeet and the male would have a bright red patch on the rump, just under where the wings cross on the lower back. Florance was rescued from a friend who thought his wife was looking after the bird, when she believed that it was his job, and so the bird had been neglected, never came out of the cage and only had food and water added, but nothing removed. There was a lovely layer of mould on the cage bottom. Now she is very much the extrovert and loves being in the company of the others - although she does constantly wind the breeding pair - Billie and Piper - up. She is the companion of Beau (although she would certainly prefer a male companion instead lol). 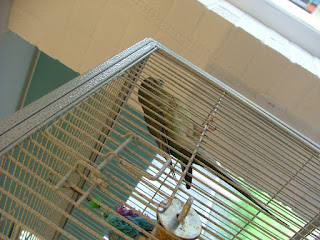 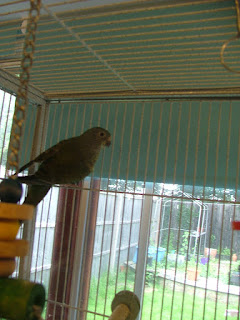