Hope you all had a good Christmas? I am back with my first Christmas card ironically enough lol. 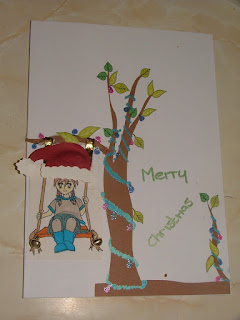 I wanted to create a Christmas scene, without using too many Christmas elements. The images were off a CDRom that came with Cardmaking with your PC 25 I think. The image of the girl on the swing was coloured with promarkers before adding to the tree. Two bells were added to the bottom of the swing and a Christmas hat to the top to make the card more festive in appearance. I also added tinsel and baubles to the tree using papermania metallic and glitter markers. A quick CAS card, which certainly cannot be classified as 'Traditional' lol.


I also have a book review:
The Fear Index by Robert Harris
A story about developing computers to allow them to use their own initiative without having to be given explicit instructions. When Alex, the president of a very successful hedge fund using his own technology to manage investment trade, is attacked at his high security home, by somebody who has the security codes things start to take a downward slide. He has to find out who is impersonating him, somebody who knows his closest secrets, and why. He also has to stop them before major damage occurs.
This book keeps you on the edge of your seat, and it is quite believable that machines could develop in the way the story implies, if given the right programming initially. It plays on your own fears of artificial intelligence as well as the much more common occurrences of identity theft and fraud. Well written and fast-paced, but the ending could have had a little more information. The story is left quite open. A good overall read.

Thank you for looking
Hugz Tinz
Posted by Furrbster at 16:36