Sorry it has been a while since I posted. It has been a very busy week with birthdays and visiting people, so I have spent very little time at my computer. However, I have made this snow themed card this evening: 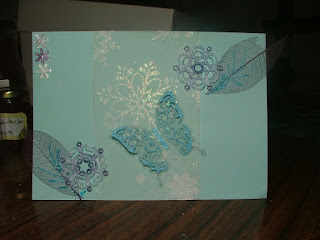 I got these butterflies about a year ago and have not had any inspiration to use them.However for this card I followed the Atlantic Hearts Sketch #139 , and used a snowflake glitter vellum for the centre panel. I then inked two felt snowflakes using pretty colour ink pens in purple and blue. I also added some glitter using papermania glitter pens in purple and blue. Leaves were added, with more glitter, to make the snowflakes into flowers.The butterfly was added to the centre, with the wings folded up to give a 3D effect. Finally snowflakes were punched from silver paper and added as accents to finish. I think this has a real wintry feel with the colours and the sparkle! 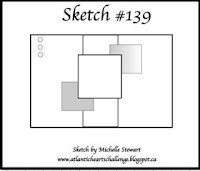 I would also like to enter this card into the following challenges:
Live and Love Crafts  #42 Sparkle
crafty calendar Let it snow
inkspirational #98 Bah Humbug (not a Christmas card)
alphabet challenge V for Vintage
CCM #154 Snow
SOS #231 Let it snow
modsquad Anything but Christmas
allsorts 342/3 Anything But Christmas


Audiobook review
The Blind Assassin by Margaret Atwood
This story is written from the point of view of the main character, Iris, when she is an elderly woman, looking back on her life. The story is based around events that led up to her sister Laura’s untimely death. The girls are brought up by their well-off businessman father, who owns several factories in Canada, but the depression after the first world war causes trouble, and leads to Iris being asked t marry Richard to save the factories. Ultimately Richard and his sister betray all that they have promised, and Iris is writing it all down so her granddaughter can finally know the truth about her family and her real father.
The Blind Assassin part of the book is a story within the story, and is one that Alex, who has won both girls hearts, tells to his mysterious lover, and which is then published in Laura’s name by Iris, several years after Laura has committed suicide.
Parts of the story are interesting, and the inner story is very intriguing, but it does tend to meander through certain parts of the story. Also the description on the back of the book made me think they were looking into Laura’s death in the story, which obviously was not the case. However, most of the story keeps you interested, and so is good to listen to.

Thank you for looking
Hugz Tinz
Posted by Furrbster at 22:34