Christmas in the Pink

I have been down the allotment and managed to get the rest of the grass cut! I also collected my first Parsnips for the stew tomorrow - two long and thin from the top of the bed and one stumpy one from the opposite end of the bed - about 50cm between them! I do have pictures but they are on my phone so I will add them to the computer later at some point.

I have started to crochet an amigurumi blue bird, so will hopefully have something to show you in the next couple of weeks. The pattern was a little confusing at first as I have only knitted animals rather than crochet, which is quite different, but I think I have got it sorted now.

Anyway, onto the Christmas card for this week: 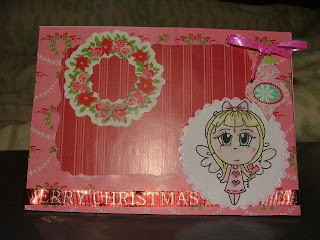 I took a plain white card blank and covered it with a free Jennifer Ellory stripy deep pink paper. I then used another paper from this pack and created an aperture using the second largest Xcut frame die. Then I wrapped a red Christmas ribbon around this panel before layering over the base. The digi stamp is from Bugaboo and was coloured using both Papermania dual brush watercolour pens and Promarkers in Satin, Primrose, Lemon and Pale Pink. This was layered onto the base according to the sketch below. Finally a wreath was cut from the free pack which the papers were taken from, and the centre cut with another die, and a papermania bauble embellishment topped with a pink ribbon bow. Pink glitter glue was added around the edge of the digi's die. 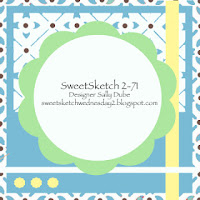 Thank you for looking :)

Hugz Tinz
Posted by Furrbster at 23:02