There is a new challenge starting over at Creative Moments today and my teamies have made some wonderful designs to inspire you. As this is my off challenge I decided to mount one of my recent cross stitch finishes to share with you all. 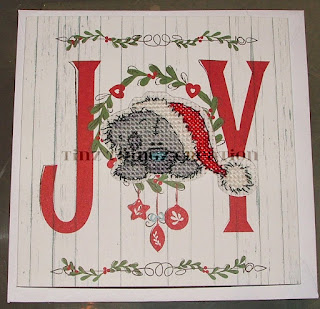 It took around 5 hours to stitch this little guy (although I didn't actually time it).

I would like to enter him into the following challenges:

ABCChristmas - C for Carols (Joy to the World)

I also have a book review to share with you at last!

Shards of a Broken Sword: The Trilogy by W.R.Gingell

This story begins in Montalier (Twelve Days of Faery) with a king whose son appears to be at the centre of a curse. Every time a woman starts to get his attention something happens to her that ruins her life in some way. Some are seriously crippled while others have gone missing. When an enchantress comes to court to break the curse, the King is unsure whether to let her – not because of the demands, as he has already decreed that anybody that breaks the curse will marry his son – but because he feels it is foolish and that it is too much for him to be responsible for all the bad things that are happening to the girls. However, she manages to convince him and even allows him to come on trips to the land of Faery. During the trips she finds two shards that she knows are important, but not what they are for.

The second book (Fire in his Blood) sees Rafiq, a dragon that can take human form, and his Prince trying to free a princess. Rafiq is bound to the prince against his will by a piece of magic tied with the shard of a sword. This magic means that Rafiq has to do what he is commanded to by the Prince. The Princess lives is a tower with a variety of levels that have to be passed to get out at the end. A handmaiden is provided to help them, who is cleverer than she lets on and is intrigued by Rafiq, so much so that she decides to try and help him. The levels of the tower are ever more intricate and test both physical and mental skills. Does the Prince have what it takes to make it through and can the bond between dragon and the royal line be undone?

The final book of the trilogy (First Chill of Autumn) is set in Llassar, a kingdom that happily welcomed the faery into their realms. Dion ferch Alawn has only ever know the faery people within the castle; very few normal humans remain there. However, she finds a prophecy that indicates she has to seal the lands of faery from those of humans once again. She knows this will cost her life; however, she does not know what it all means. She struggles against the truth that the faery people are conquerors and see humans as lesser beings, until she sees the truth for herself. Then she must join forces with the man from her mirror in order to set the world right again. This means finding the shards of the sword and reuniting them as one. There is much danger on the path as the faery folk are not overly keen to be sent back to their lands and give up their governance and domination of the human lands.

I would recommend these books as there are many twists to the plot and they always keep you guessing. The facts that each of the stories is set with completely different people in different locations, but they come together in the final book, is a really unique way of telling the story too. I enjoyed the tale from beginning to end.