I have another new card to share with you after my weekend away at the glamourous Butlins, for their Bootleg Ball live music weekend. I got back and realised I needed to mae a crad with the new limited runs image as I hadn't made it as yet - oops. But here it is: 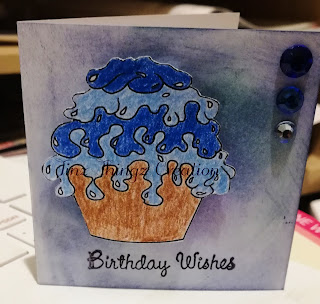 I used Distress inks in Evergreen Bough, Crushed Sapphire and Clouded Lilac to make the background (blending with a blending tool. I coloured the image using watercolour pencils and then fussy cut before using 3D foam pads to layer onto the card base. I stamped the sentiment using a patchwork free stamp set, and then added blue diamantes to finish.

And I also have an audio book review for you - I had to listen to it after going to see it at the pictures. It is Mortal Engines (book 1).

So after watching the film I decided I needed to listen to the book. It starts off very similar to the film, from the viewpoint of Tom, a historian apprentice in the library, however in the book the boy is much younger than he is portrayed in the film, and the reasoning behind why he ends up chasing Hester is different too. This could just be to make it easier to create a film friendly scene however and doesn’t change the story at all. As you work through the story it remains very similar to the film, with a couple of extra bits, that fill out the story but are not necessarily required. However, once Hester and Tom are taken by the scavengers to be sold into slavery the story changes completely. Shrike is not in a top security prison, but is instead being held in London so that they can learn how to make new undead warriors. Miss Fang does not spend as much time with the two of them, as they leave her at Airhaven and continue their journey separately, although they do end up with her airship after going to the shield wall with her later on in the story. The book is definitely written from the view of a younger person, and there is more adventure and action, which is easier to explain in a book than on film. However, the biggest change is Valentine and Chrome who swap places in the film. I can see no reason for this, other than to make it easier for the audience to be glad he dies. Also, the film has a much happier ending than the book, but the book is more realistic and less fantastic. I really enjoyed both the book and the film as separate entities.

Hugz Tinz
Posted by Furrbster at 21:09