I have made a Christmas card today with an IkesArt image: 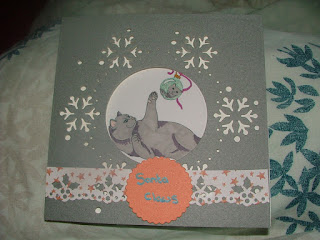 I used a Crafters Companion Create-a-card Snowflake die to create the background and the centre focal area. I added the image in the die-cut centre after colouring with promarkers. I used a Joanna Sheen edgeabilities die with holly, on a starry patterned paper to create a bottom border and added the sentiment in Metallic promarker - Green, on a coral scalloped circle die-cut.

I followed the AHSC sketch 185:

I also thought you would like to see a garden visitor to my lodgings in Cambridge: 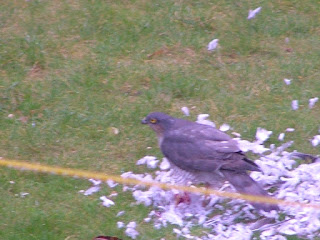 Yup a Sparrowhawk! And I got a picture too!

Here is another audiobook review for you:

The Zig-Zag Girl by Elle Griffiths
The Magic Men were a top-secret undercover mission during the War (not sure if this was the first or second world war) who were tasked to make the Germans believe that there were more troops protecting the coast than there actually were. The team was made up mainly of magicians, with a few ‘normal’ soldiers to co-ordinate the work. Whilst on the mission a tragedy occurs causing a member of the team to be lost. The story is set a few years later when one of the soldiers is now a police detective sergeant. A body is found in a way that resembles a magic trick, and is linked to Max Maphisto, one of the Magic Men. Edgar, the policeman, is sent part of the body directly, with his army rank on the address label. When another magician from the Magic Men turns up dead – again in a way very similar to that of a magic trick – Edgar starts to think the murders may be linked to the Magic Men. He and Max investigate further. This is a good story with plenty of suspense, but unfortunately it was quite easy to guess who the murderer was from early on in the story. Still a good story and with quite an interesting outcome, and it also goes on after the murderer is caught to tie-up the loose ends that a lot of stories will leave to the readers imagination, which I actually quite liked.


Thank you for looking,