It has been lovely today - shame I spent the morning at work and the afternoon trying to get my car sorted. I have only had it 3-4 weeks and there is already a fault with it!! So I had to top my engine oil up again - that will be twice in one week. Sounds easy yes! NO none of the local petrol stations have the oil I need, none of the garages are open Saturday afternoon, so I had to get a similar oil from Wilkos. Grrr so frustrated just now!

However I have made a card using one of the cross stitch designs I have had stored away for a while. I thought it was past time to start using some of these - and this time I used a little snake. 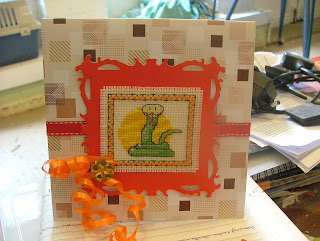 I used a geometric papermania square card blank as the base. First I placed a ribbon across the centre of the card. I have just bought some dies from Creative Dies, and I used the largest Ornate Frame on pearlescent red card. The stitching was backed with white card before layering onto the red panel, and then the panel was attached to the card with 3D foam tape. Finally some curling ribbon and a flower gem were used to make a bright topper.

This card was based around the Atlantic Hearts Sketch: 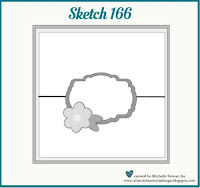 I would also like to enter this card for the following challenges:
OLL #207 Sun, Sand and Sea (you get snakes in the sand - and there is a sun behind the snake)
Deep Ocean - Colours of summer
Crafty Ribbons #157 Summer
Crafting by Designs - Anything Goes
Crafty Calendar - Punches/Dies

I also have some more little critter pictures to share with you :) Therefore there is no new pet introduction this time, but watch out for Mondays blog post - I will introduce Furby to you. Can you guess what she is though? 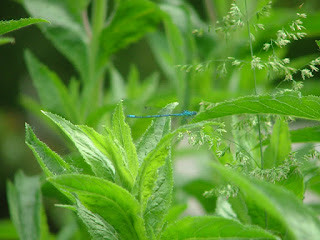 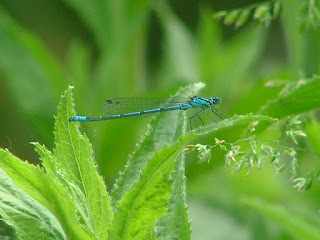 And a close-up showing that it is an Azure Damselfly 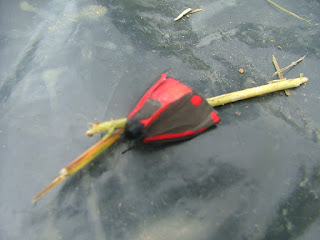 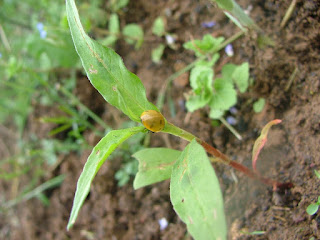 Newly emerged ladybird - just drying out the wing cases to develop the redness and spots!

I do like my allotments for seeing little critters. I had a Dragonfly - a Southern Hawker again - playing around my pond and he has been round there since Tuesday I think it was. I thought he had damaged himself as he was always there and didn't fly away when I knocked the plant he was on (or more corretly nettle he was on). However, after nearly squashing him today when picking my raspberries (he was behind the think stem, as was the raspberry) he climbed on my finger, vibrated his wings and then took off over the houses on tha far side of the allotment!! Little terror obviously didn't like being nearly squished.

And here are my Brussels Sprouts planted out and netted from the pigeons! 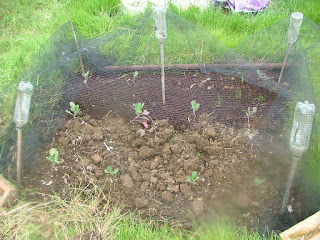 Thank you for taking the time to stop by and look at my blog.