What a lovely day it has been today. Typical when I am working the weekend!! Grrrrrrr......

However, I did manage to get down to the allotment and finish pruning my blackberry bushes (or Brambles as they are more correctly known lol). They went from this: 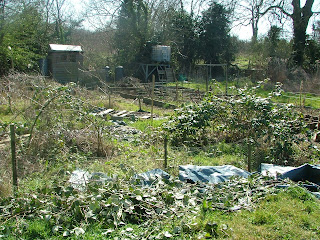 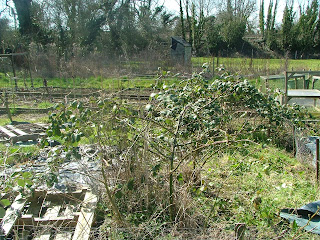 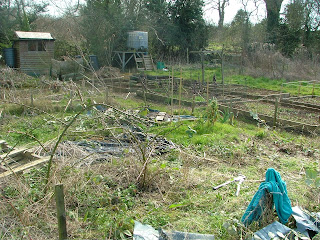 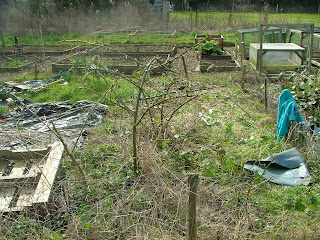 I pruned one back harder than the other. As I left them quite late to prune them (simply because of the weather and getting married) I decided to leave the new growth on one of the bushes and then compare the crop from them both and see which works best. It is a pointless trial as we lose the allotments in October this year as the land is to be used for development! I now also have lots of sharp, prickly stems to get rid of somehow - I think I may have to buy a metal bin and burn the darned things as I do not fancy trying to get the into the car to bring back for my garden waste bin lol.

I also got a card made today - very quick and simple. I used a Cross with Lilies die from Joanna Sheen and cut it out on two different pearlescent papers, which I then layered together. Then I coloured the peel-off using 'The original Peel-offs' permanant marker pens, in yellow as I only had silver stickers. I finished by punching the corners of the pale yellow base card to give this result: 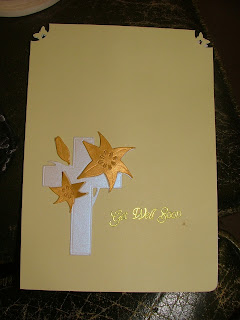 
I have also got an audio book review for you - first one in a while as I forgot to write the last one up!

Stonemouth by Iain Banks
This is story set up in Scotland, and is based around a criminal family. Stuart has come back to Stonemouth for the funeral of one of his older friends, who also happens to be the grandfather of one of two criminal families in the town. Unfortunately, Stu was also engaged to the oldest daughter but publically cheated on her a week before the wedding, causing him to flee for his life to London. He has been given concession to come back to Stonemouth for the funeral but he quickly finds himself drawn into danger again.
This book has also been made into a film, but the film is slightly different to make it more interesting on screen (and probably to make the main character look better as he is a pretty poor character in the book). Overall a good read, but probably better if the screen version has not been watched first, as the main twists are pretty much the same.


Thank you for taking the time to look at my blog
Hugs Tinz
Posted by Furrbster at 19:41