Well we can certainly tell Spring is here - it just keeps raining. I thought showers were supposed to be Aprils specialty with March usually being relatively dry?  Oh well, I will just have to craft a little more lol.

I did manage to get down to the allotment and prepare the bed for the Broad Beans, but then it started to rain so I could not sow my seeds, or prepare the potato and asparagus beds!! Grrr. It doesn't help that I am working this weekend, so do not have much time to get everything done.

Very little of the housework was done today, so that means me being very busy with it all tomorrow. However, I have managed to get the next selection of ATC's completed. This time the theme was 'In the Wild' and they all use a tiger stripes backing stamp.

The first of the ATC's is on green card, with the image stamped on the left hand edge and heat embossed using 'hi-puff' embossing powder (which seems to have a glitter effect). A tiger stripe backing paper that I received with one of the ATC's was then placed to the right and centre of the card. I drew an image of a lion with a lamb sitting on his head and coloured using pencil crayons. This was then stuck to the left side of the backing paper. A bow was added to the right of the image. (I did originally have a matching ribbon across the bottom, but it was overly obscured and so I removed it). Three little diamantes were then added to the top right of the backing paper. 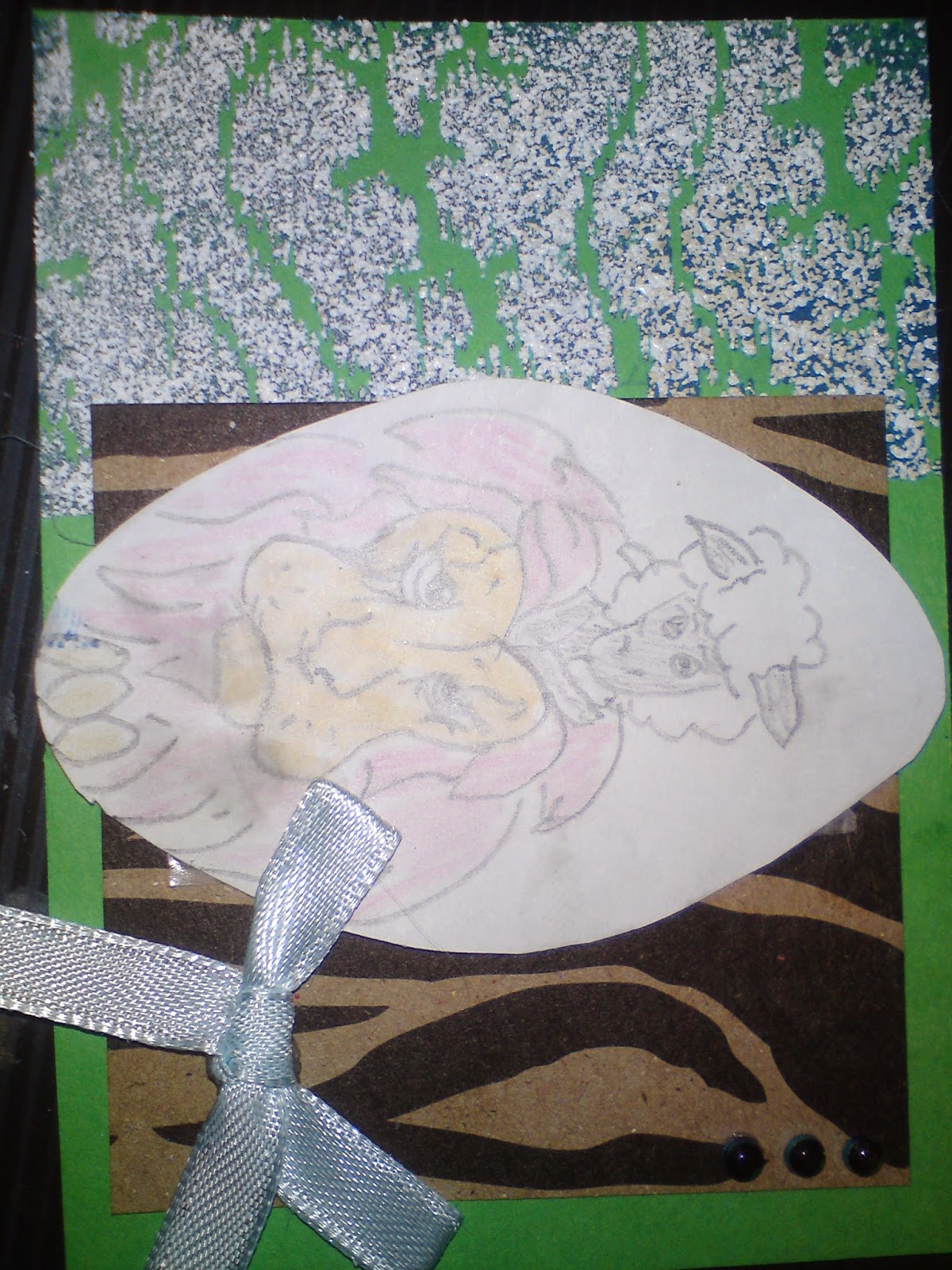 This is being entered into:
Catch The Bug - Sketch 205
A creative romance - seeing double
Simon Says Wednesday - glitter it
Craftylittlefairies - down on the farm (sorry not stamped but it is an image)
CraftyCatz - bling it up
Cute card Thursday - 313 its a wild world
Catch the bug - Inspiration photo - Lamb and Lion
Sweet Stampin' - doodles

For the second ATC the background was triple embossed using 'candy blue' embossing powder and the background stamp. The idea for this was to create a water-like effect. I found a puffa-fish on google and coloured this in using promarkers in various shades of blue to get a puffed up effect. 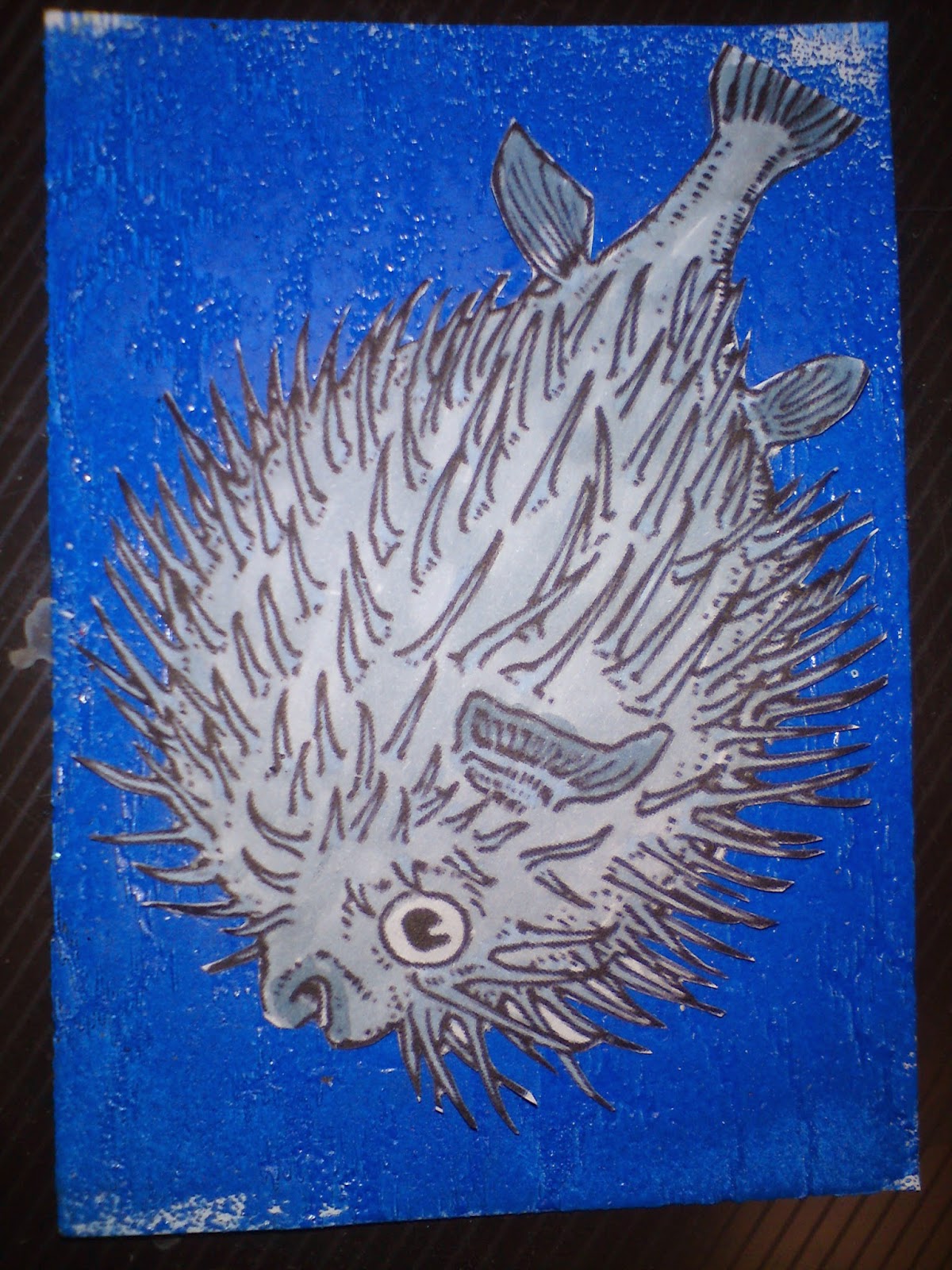 This ATC will enter the following challenges:
Simple Create Too - animals
Passion for Promarkers - monochrome
Love to create - 107 clean and simple
CRAFT - Inspiration picture - Jellyfish
Allsorts - About the boy

The final ATC involved using the same background, but with basic heat embossing rather than triple embossing. The same fish image was used but made smaller, and coloured with pink promarkers. A blue ribbon was added to the base card and the fish stuck to the left side. Two polka dot papermania buttons were added in front of the fish, with a small diamante in between the buttons. A blue oval geometric sticker was added behind the fish. 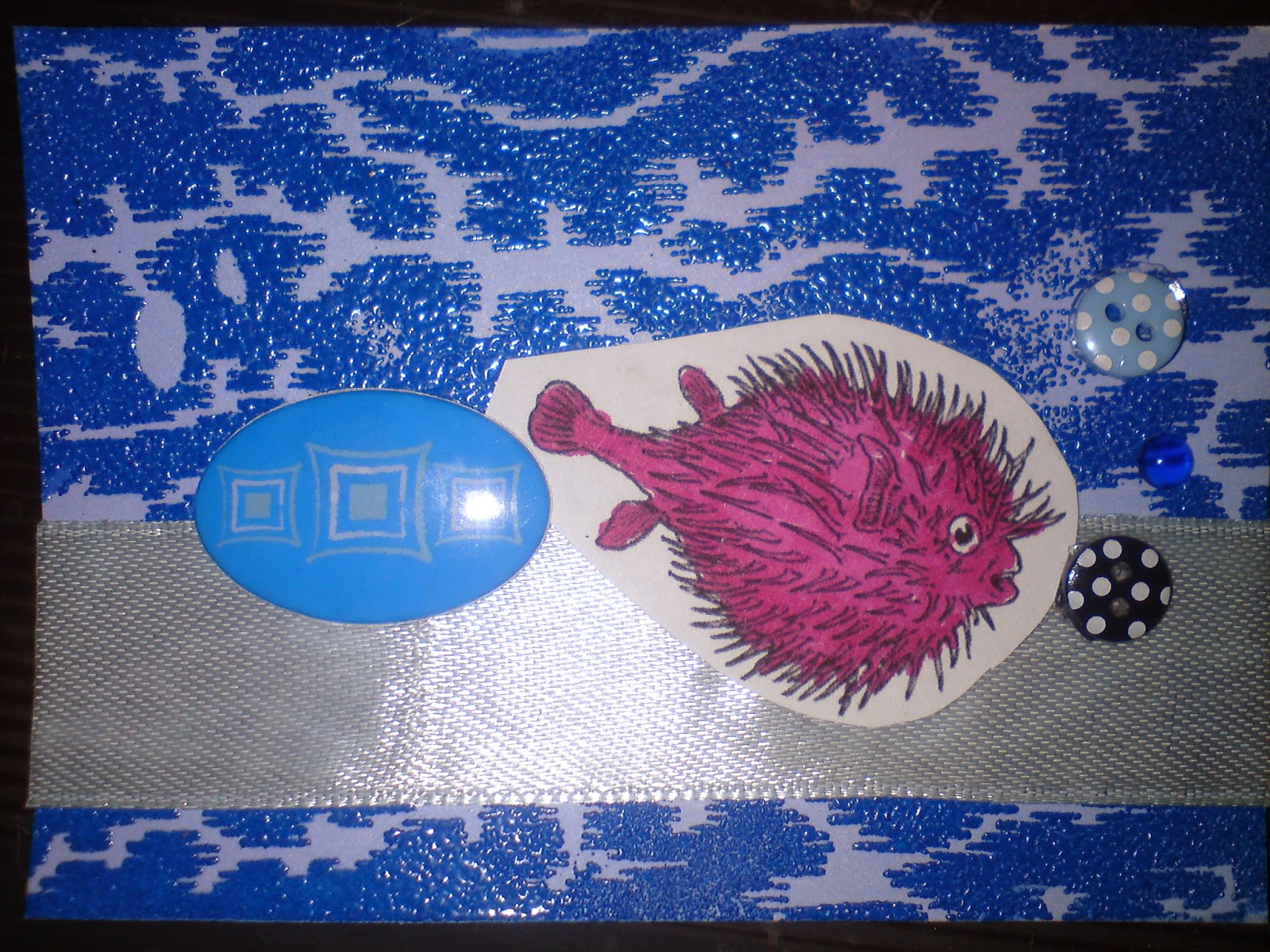 Hope you enjoyed looking!
Hugz Tinz
Posted by Furrbster at 21:03