Wow there is lots to put in this blog today. I will start with my card, as the challenges are nearly closing! A colleague at work is expecting, and we think it might be twins :). So I was asked to make a baby card for her to present before she goes on maternity leave. I decided I wanted a owl themed card - but it didn't take me long to realise I did not have any owl designs, so I had to trawl the internet for owl clipart (I did look for digi stamps but couldn't find any suitable ones). Eventually, this is the card I came up with: 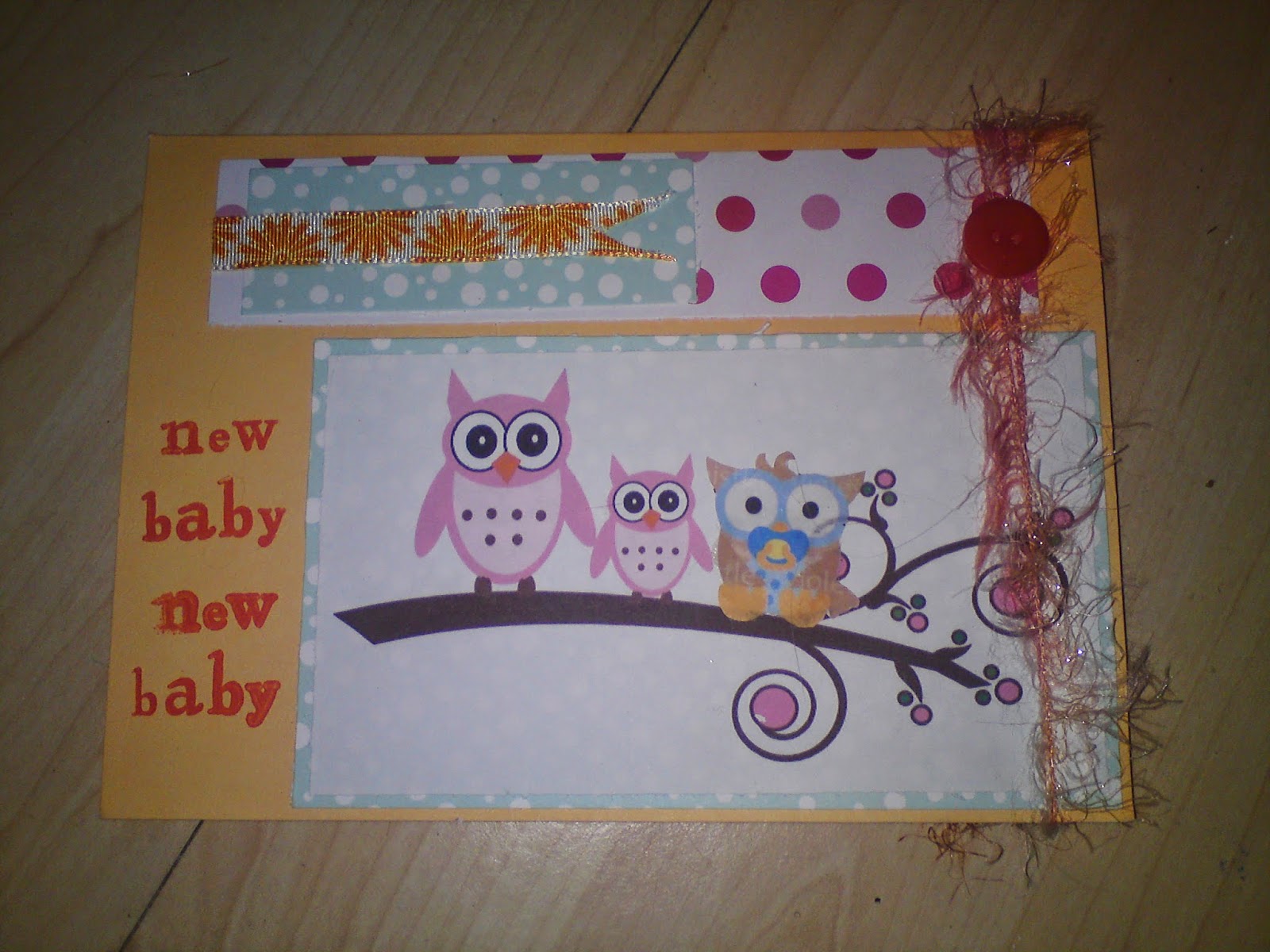 Based on this sketch from Sweet Sketch Wednesday 2 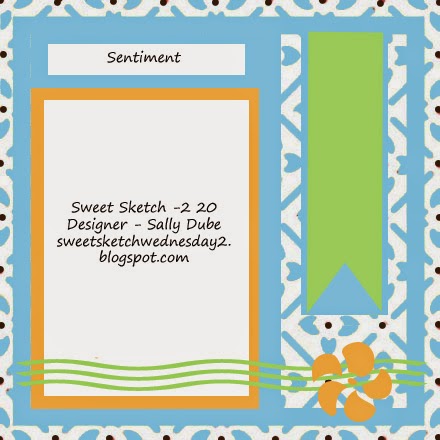 I took an orange card blank and folded it in half to make the base card. I printed the two owl clip art designs and then added the baby owl with dummy to the owls on the tree branch using spray adhesive. I mounted this onto spotty blue paper and then onto the bottom of the card blank. I took a pink spotty paper and layered the blue spotty paper on top,and then added an orange papermania ribbon. This was adhered above the image. Down the right side I attached a fluffy variegated orange to pink twine and the same twine with glitter fleck through it, adhering the ends inside the card. I added an orange button to the side of the ribbon panel and to the side of the image panel I stamped 'New Baby' using orange ink.

The next item on the crafting agenda is the update on my fish cross stitch - now at 57 hours. 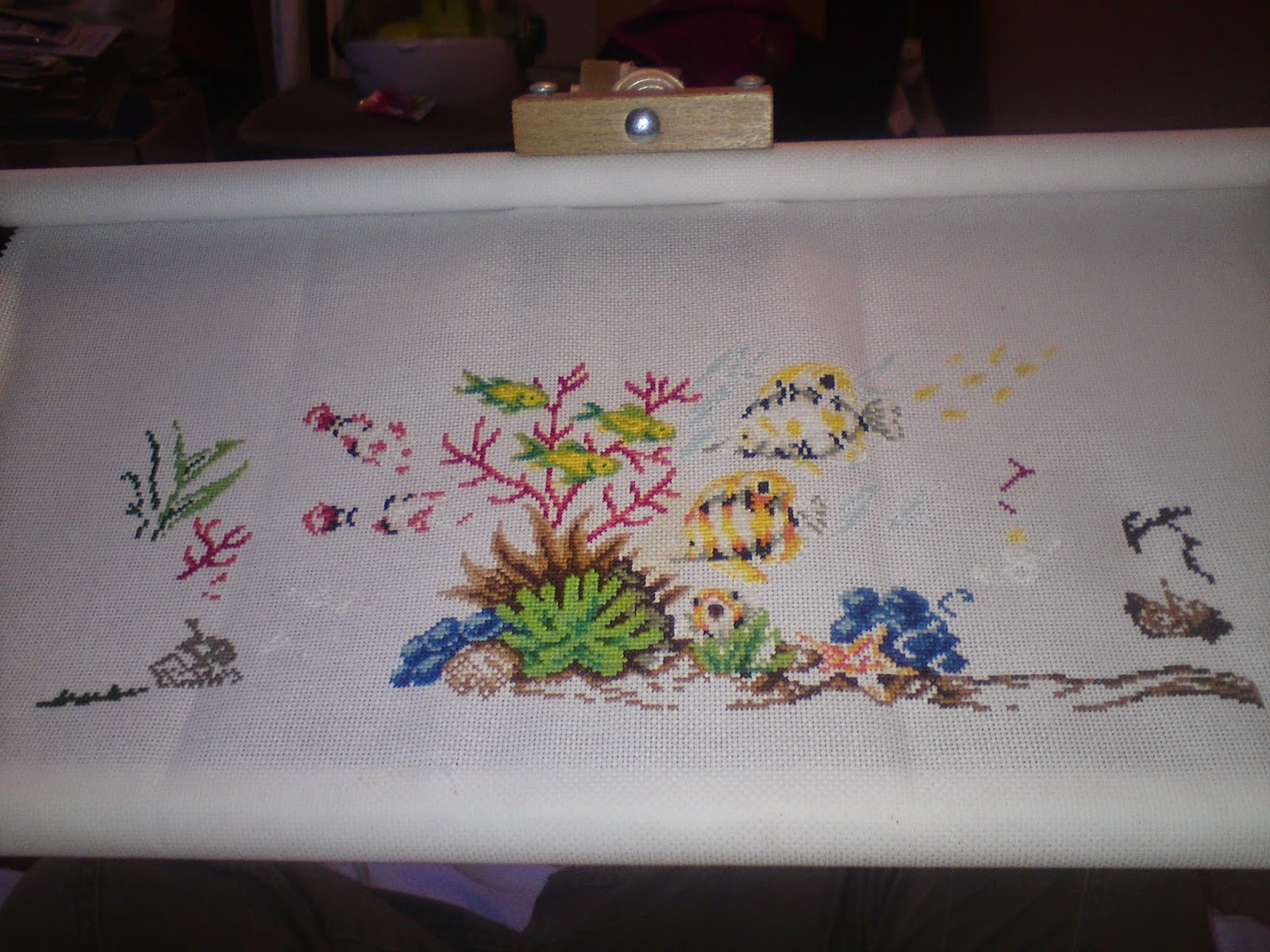 We got a bumper crop of fruit from the allotment a couple of days ago and I decided to make a flan with them (all red berries), with creme fraiche. There were tayberries, raspberries, strawberries and red gooseberries and it was absolutely lovely. The mice really quite liked the creme fraiche also (although I was trying to encourage them to eat the fruit! Anyway, as I was letting the girls have their bit I had allowed Tawny (my little blind guy) to run around on the floor. I turned around once the girls had finished to see this: 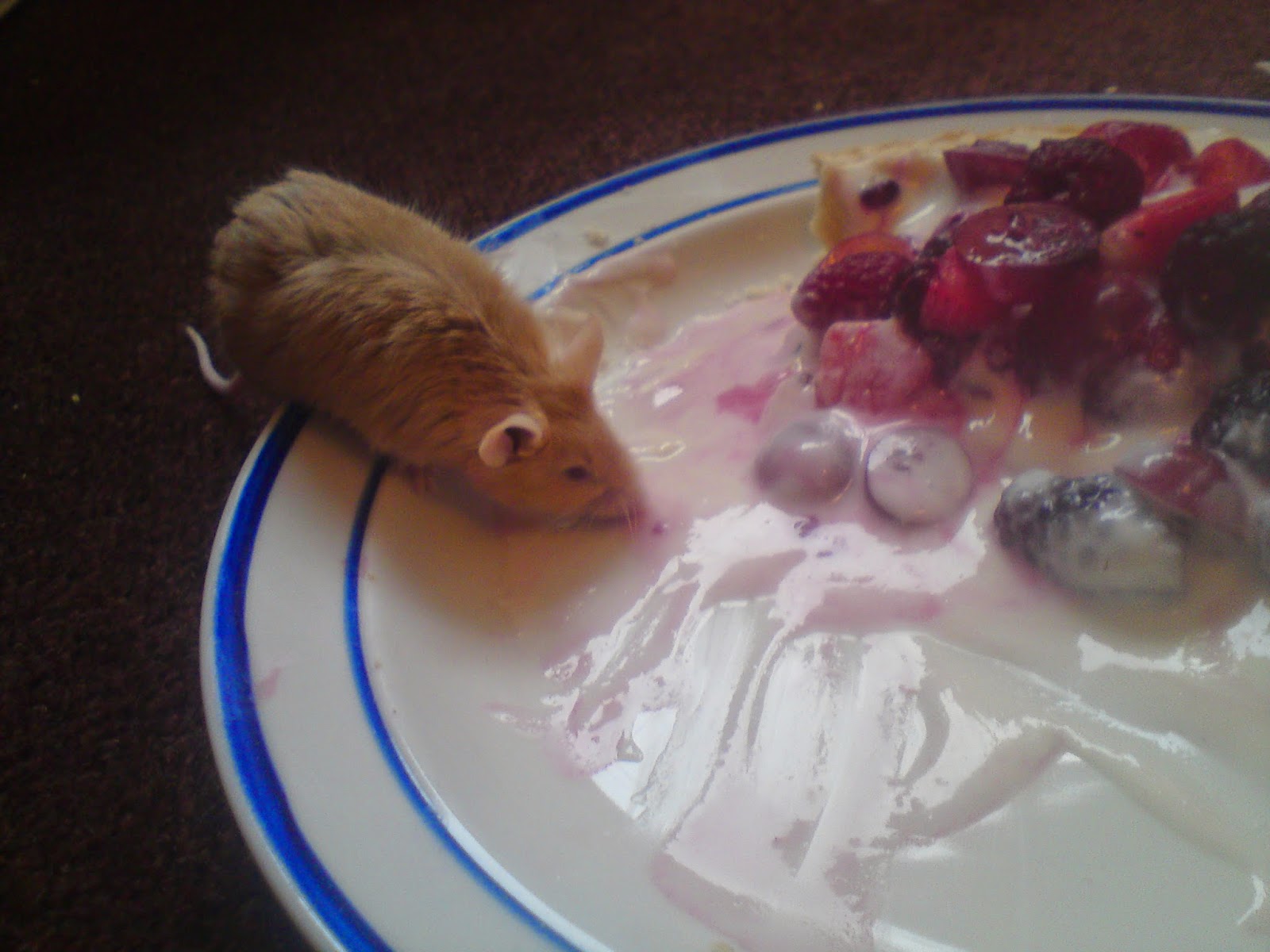 Cheeky little man decided that he could get away with eating directly from my plate. He did get away with it too as he is just so damned cute!
We also managed to get a nice crop from the Autumn planted onions, which was a nice surprise after the wash-out winter that we had! And I got half a carrier bag of Broad Beans from another allotmenteer, which will be very much appreciated, especially by OH. 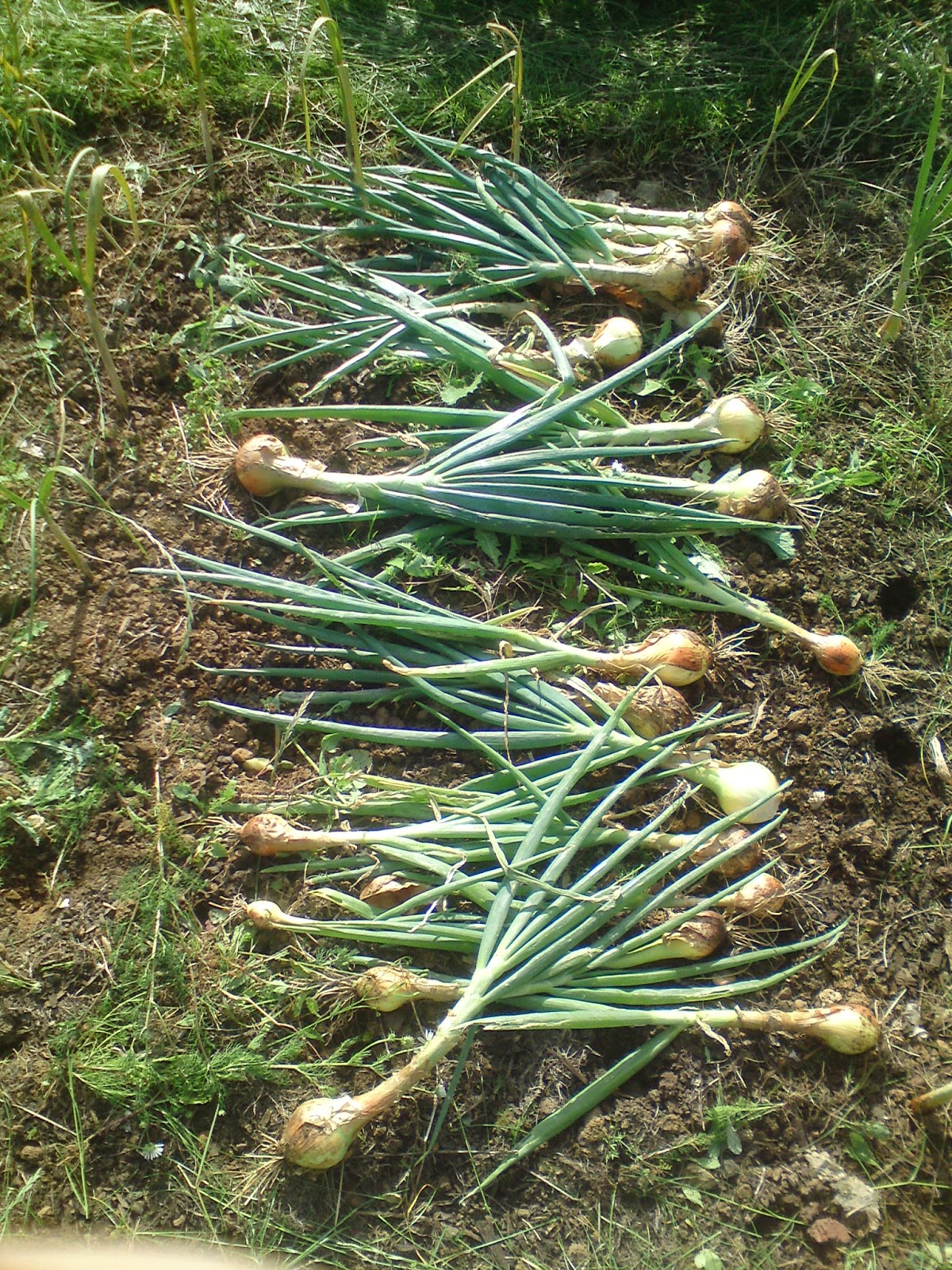 AUDIO BOOK - 'My Sister's Keeper' by Jodi Picoult.
I do really enjoy listening to the audio books by Jodi, and especially like the fact that different reader's read each persons perspective. The main plot of this story is that Sara and Brian (the parents) produce a child to be a perfect doner for their older daughter who has APL, an acute and rare form of Leukaemia. At age 13 the child takes her parents to court to sue for the right to decide what happens to her own body, or medical emancipation. Through the story we meet the oldest sibling, a son called Jesse who feels so unable to do anything that he turns to arson, both parents (the father is a firefighter/paramedic, and the mother an ex-lawyer), the sister with APL - Kate, Anna who is the doner child who is taking her parents to court, the lawyer Campbell Alexander who has a quirky character and a service dog and the guardian ad litem Julie. Through the book you get a history of the girls medical escapades, extracts of when Kate has had normal experiences that her mother never expected to see her have, Jesse's problems and also background into Julie and Campbell, which is a minor story in itself. I really enjoyed the moral and ethical issues this story brought up, and the way Jodi looks at how an illness affects a whole family. The ending to the story is a dramatic twist and was not what I was expecting, but it does work really well. If you have seen the film then be warned that the ending in the book is very different and there is a lot more in the book than can be portrayed in the film. I haven't seen the film, but having just read up about it it appears that the film detracts from the poignancy of some of the issues by making other  items more dramatic - like including a sex-scene where there could never have been one due to the treatment that Kate was undergoing.

If you enjoy reading about difficult situations in a fictional sense, but with a good grounding or moral and ethical background then I would definitely recommend this book! 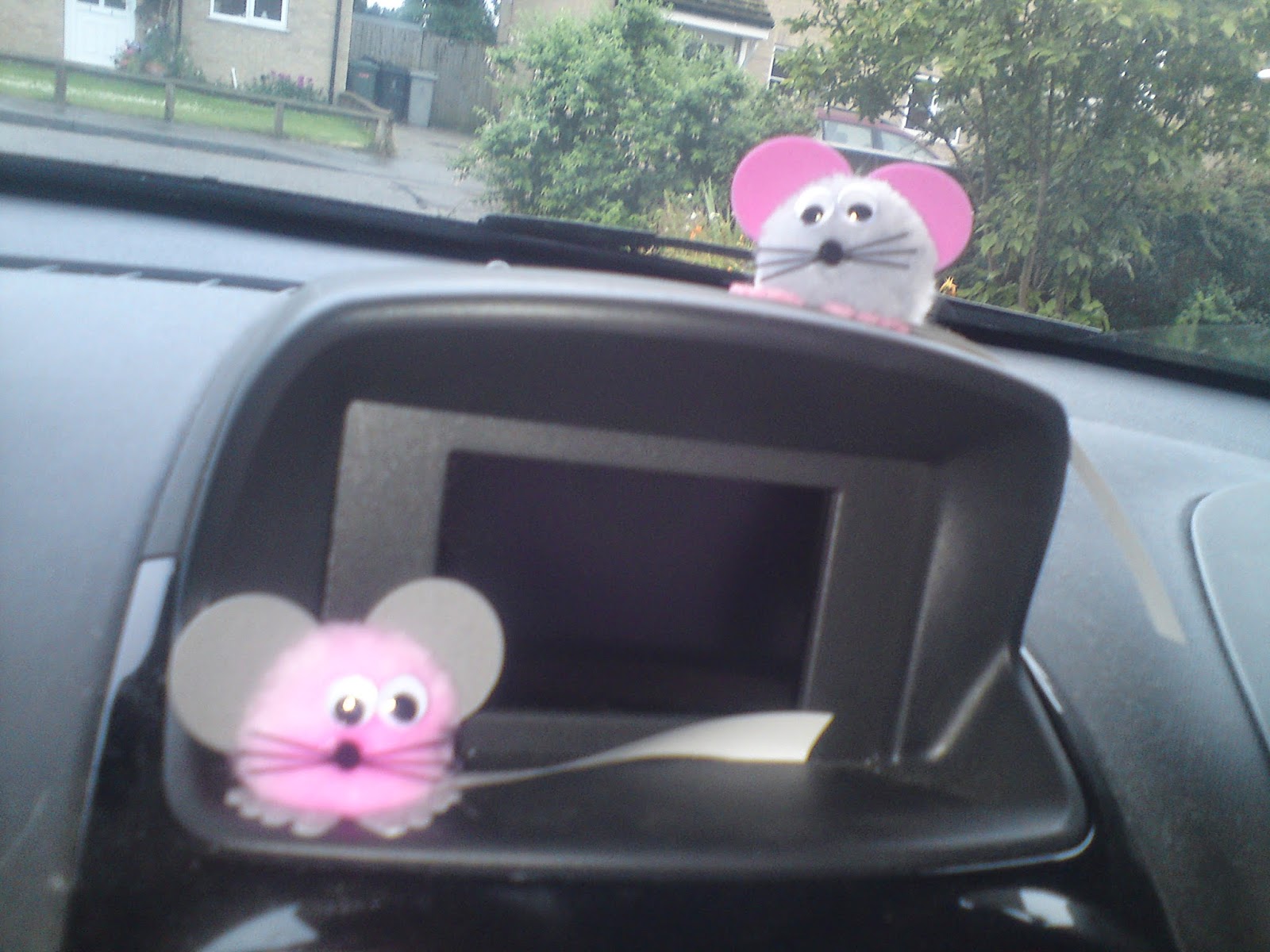