I wish to share a beaded decoration with you today. 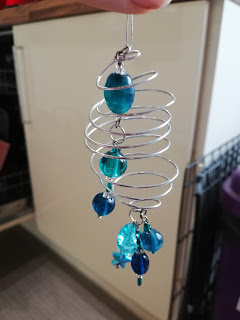 This has a wire outer case, which is literally just wrapped wire. The central part is a head pin onto which beads have been threaded and then attached to the cage. Several head pins layered with different beads make the bottom tassels. This is a hanging decoration again, which I used for my Christmas trees.
Again, this is for my facebook groups - here and here - do feel free to pop along and join in.
I would also like to enter this decoration into the following challenges:
CraftyHazelnutsChristmas #576 upcycle/use something old - these beads have been in my stash for a while!
SOS #460 Something beginning with S - Silver Wire
intaas #124 Anything but a card
CraftyCalendar - Anything Goes
I also have a book review to share with you today:

I really like Jodi’s books as they are based on things that could happen in real life, and often address very pertinent questions, looking at the situation from a variety of angles and opinions. This book was no different. The main storyline is that Jamie loves his wife so much that he kills her when she asks him to. His wife has end stage cancer and the doctors are unable to say how long she has left to live, how much pain she will be in, or even where the cancer will strike next. She is unable to bear this any longer and asks Jamie to kill her, in a way that she chooses – suffocation with a pillow.

Cam is the police chief of a little American town due to his lineage. He didn’t ask to be the chief, however his family were the head of the Scottish clan, before they moved out to America, and the clan mentality has remained, meaning that as the only child, Cam must take over his father’s role in the town. Cam has settled into this role with a wife that adores him, but often daydreams about far away places and doesn’t feel he is able to share this longing with his wife, who doesn’t like to travel.

Mia has always been on the move. Her parents were so in love that they often forgot about her, and so she has never felt like she belonged anywhere, which contributes to her inability to settle anywhere. Cams little town is just another stop on her journey.

Jamie takes his wife to Cam’s town to kill her as he is unable to bear the thought of living in the town where it happened. As Cam is his cousin and so he is technically part of the clan, he believes he will have a fair hearing. He drives to the police station and confesses to killing his wife, putting Cam in a difficult position. Cam’s wife is keen to help Jamie in any way she can, and Cam’s family also feel like Jamie should be helped, however as the police chief Cam is unable to take sides. The main story line is looking into the facts of Jamie killing his wife, and the beliefs and opinions of others in the town.

The side story is of Mia and Cam. Mia is a breath of fresh air and upon first meeting her Cam feels immediately attracted to her, as though he has met her somewhere before. Eventually, even though Mia is working for his wife, they begin to have an affair. Mia has been to many of the places Cam wishes to go, and seems to be the embodiment of what he wants. His wife on the other hand just does everything she can to please him.

The book asks the questions what is right and wrong? Can we determine when somebody dies if they have requested it? Are there valid reasons for having an affair? Does one person always love more than the other in a relationship? A very good book, with a captivating telling of the story and well worth a read if you like these sorts of questions.

Thanks for looking,
Hugz Tinz
Posted by Furrbster at 20:07