I have made a second card to remind you all of our current challenge over at Creative Moments, where the twist for the next week is to make us giggle (although the main theme is Anything Goes, as always).

I struggle with puns - I managed with my first card, but after having to take the guinea pig to the vets I really ran out of inspiration for this one - so I was happy with maybe just getting a little chuckle instead. 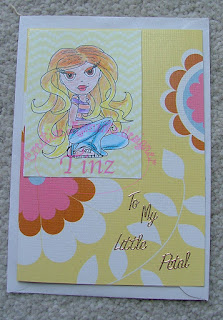 I coloured the image with watercolour pencils, and was quite happy with the effect that I achieved. However I didn't blend with water as I had only used a basic cardstock. I did layer the image onto a funky background before printing though. I then used a floral base card and peel-offs for the sentiment.


I would like to enter this card into the crafting by designs and not just cards Anything Goes challenges.


Thanks for looking, and here is another book review for you guys:

Come and Find Me by Sarah Hilary
This is a crime drama, and a good one! Mickey is in prison for attenuated burglary (I might have the first word wrong!) and there are two women writing to him, both seemingly obsessed. When Mickey escapes on the back of a riot DI Marnie Rome is worried that it may be too late for one, or both, of these women. Marnie understands obsession as she has her own addiction to her foster brother, who is also in the same prison due to murdering her parents. She has her own demons to face, whilst also trying to find the monster that is on the loose.
This is a gripping story of half truths and assumptions. It shows how making assumptions can cause the trail to go in completely the wrong direction. Throughout the story you get an insight into the lives of the main characters, who also have their own problems to deal with, and there is a commentary from the most severely injured in-mate, who was also Mickeys cell-mate. I really liked the way the commentary gave you inside information about life in the cells, without shedding any light on the on-going investigation. Information is gleaned at the same time that the police find out about it, so that the reader has an in-depth knowledge of what had happened, but without spoiling the story. This means that you as the reader also follow down the wrong path and have to re-think what you thought you knew. There is a good twist at the end of the story and I would be very surprised if anybody figures it out too far in advance of it being revealed. A very good story.