Hello and welcome to a very blustery Wales lol. I have made a card using Boofle Cd-Rom and Digital Designer this time.

The elements were layered together in Digital Designer before printing onto A4 cardstock (although as I use a laser printer rather than an inkjet, it does seem to curl the edges annoyingly!). I then added pearls and a diamante (because I didn't have a blue pearl) to the blitter elements. 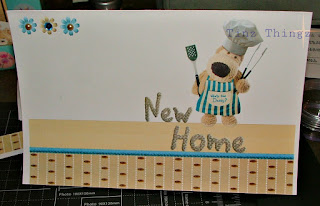 I thought that the image was perfect for moving into a new home at this time of year - what better way to have a housewarming than with a BBQ in the summer sunshine (that is of course assuming that we haven't had all of our allocated sunshine for the year now lol).

AYLI - Pearls or Gems? - I like to use pearls for the centre of flowers, but I like using both at times. In this case I have done one flower with a gem instead and I think you can really see the different effect they give. In this case I think the pearls work much better.
Addicted to CAS #115 Summer
MTTC #350 In the Garden
CCCB #370 Two colours only (I used brown and blue)

I have been having my patio done, and a shed base put down this week. Here is how it looked before: 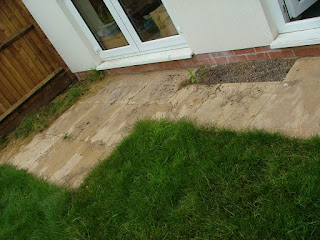 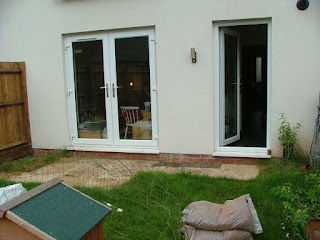 I haven't got after pictures just yet, but will take some tomorrow once the rain and wind dies down a little bit! Now just to wait for the shed to arrive next week - yippee. I will then be able to get the large box of plant pots (and spiders) out of the bird room!

We went to the local Wildlife Trust open day event today, which was great fun. They had Reen Dipping and had managed to catch a Giant Water Beetle larva, as well as a couple of Dragonfly Nymph and a Newt Eft also! Not many butterflies for a Big Butterfly Count attempt though due to the poor weather - 3x Meadow Brown and 1x Small White. I did however find a small patch of Small Tortoiseshell caterpillars on some nettles, and saw a baby Water Vole. No pictures I am afraid due to the adverse weather.

I do have an audio book review for you again though:


Master of War by David Gilman
This is the story of a young archer (Blackstone) who goes to war in France to save the life of his brother, who has mental problems but a lot of strength. During the war the brothers make many friends, however the lives of both are nearly lost. Blackstone manages to cling to life, but will never be an archer again, and is left in the care of a noble French family. Their ward is already known to Blackstone as he saved her from certain death earlier in the story, and she helps him through the difficult times, enabling him to see a new purpose for his life, in which he can still serve his king and country. But not without danger. This was a good book, although the reader is a little OTT at times. I can’t wait to get hold of book #2 now.


Thank you for taking the time to look at my blog,

Hugz Tinz
Posted by Furrbster at 21:00