Baby tri-fold to the Hangman

Home late tonight so still not managed to take the last tree down!! Will not have time tomorrow, so looks like it will be a job for the weekend. I can pretend it is Christmas for a little longer then lol.

My crafty creation this time is a new baby tri-fold angled card. This did not work out very well, and I am not sure about the colours, but I wanted it to be bright rather than pastels and to be unisex. 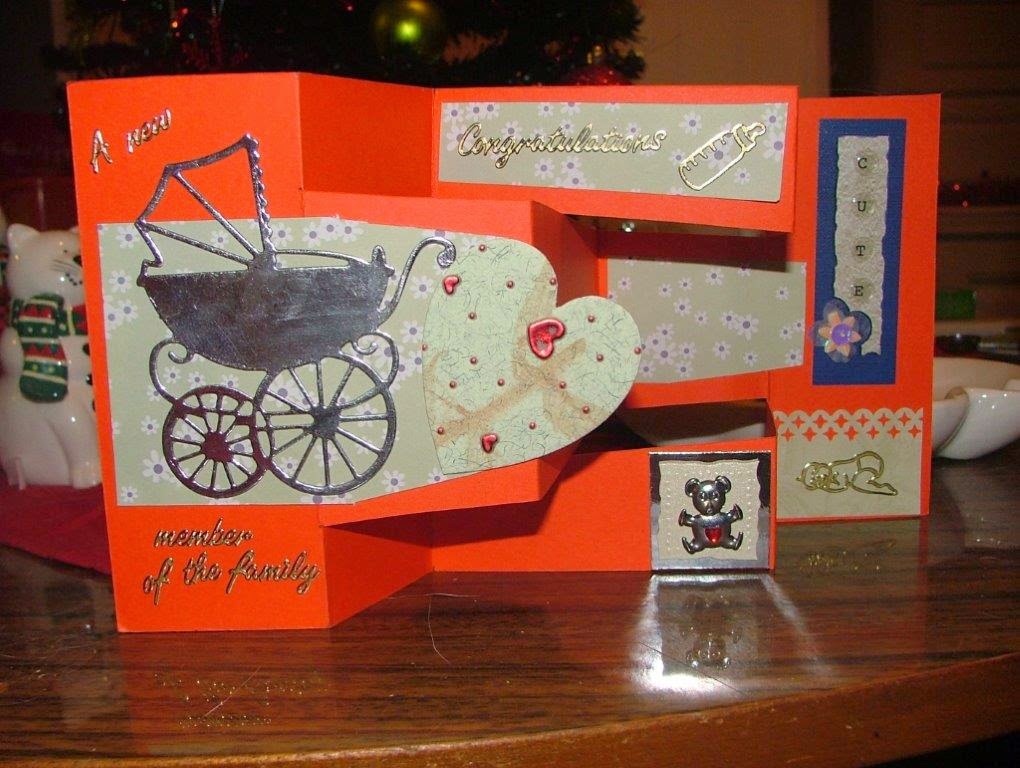 A bright red base was made into a tri-fold card, with an angled centre strip. A pastel green patterned paper was used along the accent areas. On the front area a new pram die-cut was stuck over the top of the patterned paper and a green heart die added, to overlap the fold. 'A new member of the family' sentiment was added to the card. To the top accent strip a congratulations peel-off was used, with a baby bottle, and a teddy topper was added to the bottom. On the far side panel a border punch was used to make an edging strip and a baby peel-off was added to this. Finally a 'cute' topper was added down the side.

Audio book
Naked to the Hangman by Andrew Taylor
This book is based around a detective from Lydmouth, in the UK. Just as DI Thornhill’s ex-comrade from his time in Palestine reappears on the scene with a warning for him, he is forced into taking some annual leave. When this man is found dead, Thornhill briefly comes under suspicion, due to his need to know what is happening on the case. He cannot come forward with his information as he would incriminate himself in a Palestinian crime. Gradually, through brief chapters, the reader finds out what happened in Palestine, and why Thornhill is under threat of death.
However, as all this is occurring there is also an upcoming charity dance and something is going on with Miss Buckholt, who shares a house with the dance teacher, who is acting very strange. To complicate matters more, a young girl who is new to the area is also a source of trouble, though not intentionally. Both of these people can be placed at the scene of the crime, but the police have to find out what they were doing and who the mystery dead man is, without Thornhills help.

Thank you for looking
Hugz Tinz
Posted by Furrbster at 20:55